Experience nature and rich history while discovering Roanoke Island. Here are our favorite things to do when you visit Roanoke Island, NC.

On a recent trip to Roanoke Island, North Carolina, I learned that the world’s largest statue of Queen Elizabeth I is on the island, America’s longest-running symphonic drama happens here each summer, and there’s a whole lot of science behind distilling rum. I didn’t discover what happened to The Lost Colony. That remains a mystery.

Roanoke Island is tucked between the Outer Banks and mainland North Carolina, surrounded by sounds with crab pots and sailboats. The 18-square-mile island is steeped in history, rich in natural beauty, laidback, and welcoming. It seems to be a place where neighbors look out for each other. You’d be right if you’re picturing a place where Andy Griffith would fit right in. He lived here until he passed away in 2012.

As a history buff and nature lover, Roanoke Island appealed to me on many levels. I could easily imagine pedaling my bike around Manteo, Roanoke Island’s historic waterfront town. Here are a few of my suggestions for things to see and do during your visit to scenic Roanoke Island.

Roanoke: Solving the Mystery of the Lost Colony

Fort Raleigh National Historic Site is about three miles from Manteo on the north end of Roanoke Island. The historic site includes the Lost Colony grounds and visitor center, a monument to the Freedman’s Colony, and the Elizabethan Gardens. I started my day at Fort Raleigh because not knowing what happened to the Lost Colony was killing me.

The Lost Colony of Roanoke Island

I asked the ranger at the Fort Raleigh National Historic Site, “Disease or famine?” He responded, “Disease, famine, assimilation, or just moving on might explain what happened to the Lost Colony at Roanoke…or a combination of everything.”

The visitor center includes a museum with a video on how the English settlers arrived, their difficulties, and what may have happened to them. Archeologists continue to make discoveries, and the museum has a collection of their finds.

On the grounds, you’ll see a marker for Virginia Dare. She was the first baby of English descent born in the New World in 1587. Her grandfather, Governor White, returned to England for supplies when Virginia was just nine days old. When White returned three years later, the colonists, including his daughter, son-in-law, and granddaughter Virginia, had all disappeared. Today the fort and houses are gone, but you can see the mounded earth foundation of the former settlement.

If you visit during the summer, you can catch a performance of The Lost Colony in the outdoor amphitheater on Roanoke Island. The first production dates back to 1937.  Andy Griffith played Sir Walter Raleigh in the play early in his career.

I noticed another historical marker near the visitor center. Union troops conquered Roanoke Island during the Civil War and freed Black slaves. Under the protection of the Union army, the Black community built homes, schools, and churches. More than 1000 freed slaves—men, women, and children—from mainland North Carolina also flocked to this haven. In 1867 the government returned the land to its former owners, and the community disbanded. Queen Elizabeth I reigned when her subjects crossed the Atlantic and settled on Roanoke Island. The Elizabethan Garden at Fort Raleigh Historic Site is patterned after a royal garden with a great lawn, fountains, and statues. A statue of Queen Elizabeth I, the largest in the world, keeps an eye on visitors. You’ll also see a statue of Virginia Dare in the garden.

Queen Elizabeth I statue in the Elizabethan Garden. Photo by Teresa Otto

I visited in May when roses took the stage. Volunteers manning the gift shop said the garden performs every season. Camellias bloom in the winter, azaleas in the spring, and chrysanthemums in the fall. The garden’s highest point overlooks Roanoke Sound.

See Rescued Turtles at the Aquarium

The North Carolina Aquarium on Roanoke Island showcases local sea life, otters, alligators, and turtles. It even has a stingray petting zoo.

The sea turtle hospital was the highlight. Officially called the Sea Turtle Assistance and Rehabilitation Center, I learned about two patients recuperating in tanks at the hospital under the watchful eye of a volunteer. They were expected to recover fully and then head out to sea.

When the veterinary staff is treating a patient, you can watch through a picture window, and in the room next door, you can practice doctoring in a mock clinic. Kids of all ages (I’m nearly 60) can diagnose and treat a turtle patient.

The aquarium is all about education and emphasizes the importance of keeping plastics out of our oceans. Ingesting plastics is a common and potentially deadly reason sea turtles land in the hospital. The aquarium requires advance reservations and sells tickets online.

Manteo was officially established in 1873 and named for the Croatan Indian chief who befriended the English colonists. Like those from the Lost Colony, little is known about what happened to him. If you want a quick overview of the area’s history, you can join a Manteo Historic Walking Tour. They offer one tour at 7 pm every Tuesday through Saturday from April through October. Book online to reserve a spot.

I spent some time milling around the historic downtown, browsing boutiques and perusing the Dare County Arts Council gallery. The gallery is housed in the former courthouse and showcases the work of gifted local artists.

I was lured into the Roanoke Maritime Museum by the smell of wood shavings and lacquer. The scent instantly brought back memories of my dad’s woodshop. The free museum highlights shad boats. Local craftsman George Washington Creef designed and built the first shad boat in 1870. These small boats gained immediate popularity with coastal fishermen due to their stability in stormy conditions. 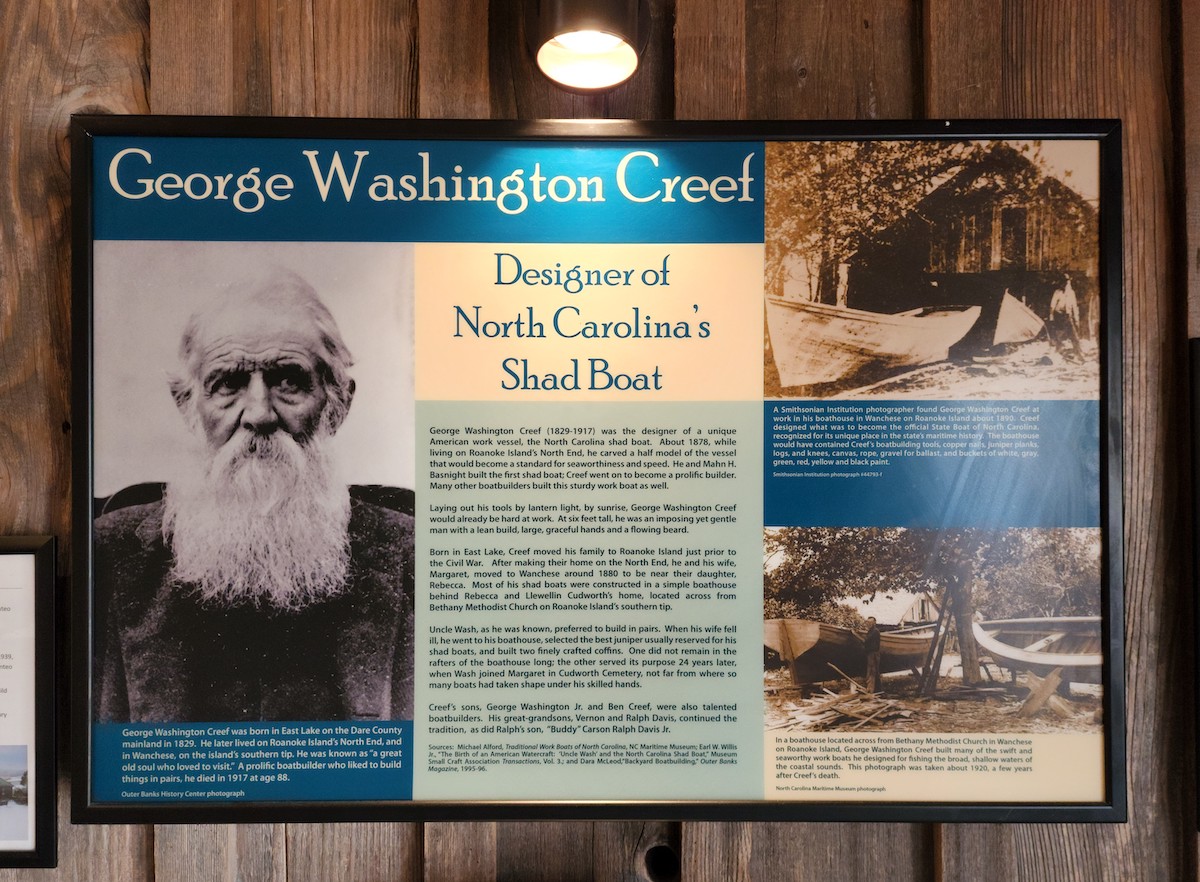 A wooden pier juts out to the Roanoke Marshes Lighthouse behind the boat museum. The stilted white cottage with black shutters and a red roof replicates a lighthouse that once stood off the island’s southern shore. Inside you’ll find historical exhibits, and outside you can enjoy a 360-degree panoramic view from the perimeter deck.

More than a thousand shipwrecks lie in the Outer Banks, the Graveyard of the Atlantic. Lighthouses didn’t always prevent ships from crashing into the shoals. Legend has it that cargo washed ashore, including barrels of rum so strong that they could kill the devil.

The Outer Banks Distillery in Manteo celebrates this history in a tasting room full of shipwreck artifacts and creative, albeit non-devil-killing, cocktails. In addition to making their gold, silver, and pecan Kill Devil Rums, they periodically distill a limited-edition rum named for a local shipwreck. If you’re interested in seeing how rum is made, peek into the onsite still room and ask one of the owners to tell you about the process. Or cut to the chase and sample the finished product.

Close Up of Still at Outer Banks Distillery. Photo by Teresa Otto

Sail at Sunset Near Roanoke Island

I finished my day on Roanoke Island with a sunset sail aboard the Sea’Scape. Owners Katherine and Dan Bottjen of Sail the Outer Banks offer 2.5- to 3-hour private charters for up to six people departing from downtown Manteo’s marina. You can sit comfortably in the cockpit or lounge at the bow. I discovered why sailing has such appeal. We silently skimmed Albemarle Sound and watched a parade of cloud characters glide overhead. The clouds parted, and we were ushered back to Manteo by the full moon’s light.

You can bring food and drinks aboard. I’d recommend getting takeout from Avenue Grille and Goods. If you’re a hummus fan, start with their edamame version.

When You Visit Roanoke Island, NC

Roanoke Island is a place where you can experience nature and enjoy the area’s rich history. Manteo, Roanoke Island’s historic waterfront town, is one of those great small towns where you can slow down and relax. Do let us know what you think of Roanoke Island on your next visit. Check out Wander for more great places to explore when you visit North Carolina and some of our other favorite historical travel suggestions.